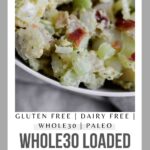 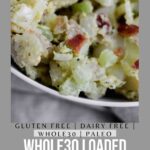 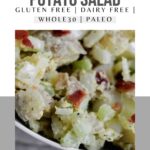 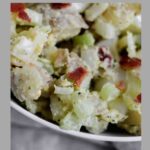 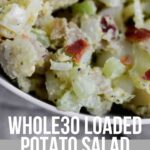 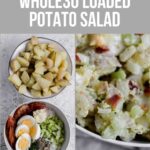 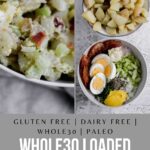 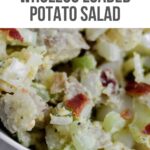 This post contains affiliate links. I earn a small commission if you choose to purchase through qualifying links.

Potato salad is the ultimate spring and summer side dish! This Whole30 Loaded Potato Salad is an awesome combination of a classic potato salad and a German potato salad. Did I mention it has bacon?!

Can you eat potatoes on Whole30?

What potatoes are best for making potato salad?

Making this potato salad is easy and won't take a ton of time. Here's how to make it...

Here are a few substitutions you can use for this recipe...

mayo/mustard/vinegar- This recipe calls for all three. You can eliminate the mayo to make this a mayo free potato salad, or leave out the mustard or vinegar if you don't like those. This potato salad is just as great when only using mustard or only using mayo

potatoes- This recipe calls for Yukon gold potatoes but you can substitute red potatoes if you want. Either one will hold up great in this recipe

Store this loaded potato salad in an air tight container in the refrigerator for 3-4 days.

Looking for more side dishes? Check these out... 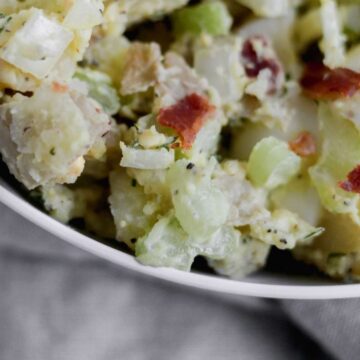 Store in an airtight container in the refrigerator for 3-4 days.

Welcome to my kitchen! I am so happy that you're here! My name is Kaleena- I am a 30 something Texan, wife, and dog mom who loves traveling and all things food. Here you will find mostly gluten-free, dairy-free, Whole30, and Paleo friendly recipes that your whole family will love!