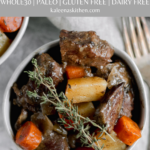 This Whole30 Crockpot Pot Roast slow cooker recipe is easy to make and packed with flavor. I actually make this pot roast recipe with bison chuck roast and it's amazing. It's one of my favorite crockpot recipes!

How to cook pot roast in a crockpot?

First you will cut your chuck roast into 1 -1.5 inch pieces and place in a large mixing bowl.

Second, you will sprinkle 2 tablespoons of arrowroot flour into the mixing bowl with the chuck roast pieces and toss them together with tongs.

Add two tablespoons of avocado oil to a large sautÃ© pan and heat to medium heat.

Once the oil is hot you will sear the meat for 3-4 minutes on each side. You don't want the meat to cook all the way through, you just want to brown the outside.

Next, you will throw the browned meat and all the juices into a crockpot.

Finally, add the sauce into the crockpot and cook on either low for 8 hours or high for 4 hours.

Is it ok to cook a pot roast on high in the crockpot?

You can cook this recipe on high in the slowcooker for about 4 hours if you would like. Depending on how much time I have when I am cooking it I will either do 4 hours on high or about 8 hours on low.

Does liquid need to cover the pot roast in the crockpot?

Your liquid does not need to cover the pot roast when cooking it in the crockpot. You will see that there seems to be very little liquid in the slowcooker, but trust me it is the perfect amount.

How much water do you put in a crockpot to cook a pot roast?

I prefer to use beef broth instead of water in this Whole30 Crockpot Pot Roast recipe. You could substitute water or even chicken broth if you would like. The beef broth tends to give the pot roast a little extra flavor.

Do you have to brown a roast before putting it in the crockpot?

I have an amazing crockpot from Ninja that can also be used as a stovetop, so I am able to brown the meat right in the crockpot then switch it over to the slowcooker mode. It comes in handy!

Can I make substitutions?

There are a few substitutions you can use in this recipe if you would like. For example, I like to use bison chuck roast but you can use traditional beef chuck roast.

Also, if you don't have beef broth you can use chicken broth or even water if you need to.

If you don't have arrowroot flour then you can substitute tapioca flour.

Looking for more Whole30 recipes? Check these out... 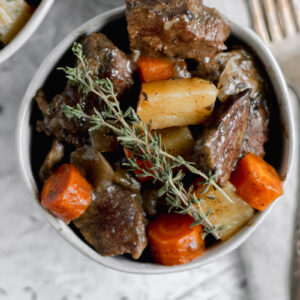 Welcome to my kitchen! I am so happy that you're here! My name is Kaleena- I am 30 something Texan, wife, and dog mom who loves traveling and all things food. Here you will find mostly gluten-free, dairy-free, Whole30, and Paleo recipes that your whole family will love!